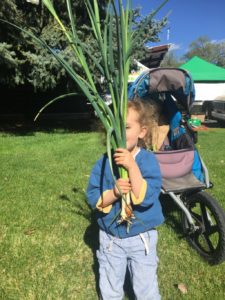 Our community farmers market runs every Sunday, 8-12 until late October and it is BOUNTIFUL. If you go, you will likely spend more time than you planned because you will run into other locals you know and stop to chat. Obviously, eating farm-fresh produce raw is enjoyable enough, but I want to share a few of my favorite ways to prepare these treasures into toddler-approved meals. 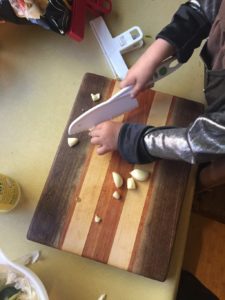 I like to get my toddler as involved as possible, its honestly easier to have her “help” than listening to her whine while we’re trying to make dinner. So mini pizzas are extra fun because she gets to customize her own. Also, they are a fantastic way to use a variety of veggies. We try to make our own pizza crusts but English muffins work really well too. Prep your toppings, let the kids distribute them as they wish (it will get messy, let the chaos happen they’re learning life skills) bake your pizzas for 12ish minutes at 400ish degrees and dinner is done. We like to top our pizzas with bell peppers, onions, spinach, tomato, and whatever else strikes our fancy. Get creative.

It’s like green eggs and ham, except its just a grilled cheese and we do like it, sam I am. Put a heaping pile of spinach and/or kale in a food processor with cheese of your choice, make it into a spreadable mush, put it between two slices of bread and grill it. Surprise! Your two-year-old is now eating leafy greens. 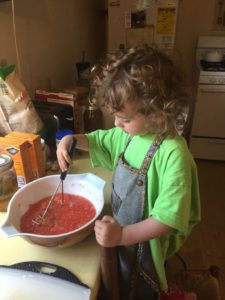 I get insatiable tomato soup cravings, and I’m really picky about the quality of the soup. So all summer we make huge batches of homemade soup and freeze it. Some farmers market stands even have deals on ugly tomatoes. If you are particular about the texture you can blanch and skin the tomatoes first, but we usually just core them and cut them into quarters. I throw the tomato quarters in a baking dish with whole cloves of garlic, chunks of onion and some oregano. Then drown it all in olive oil and roast at 400 until it smells yummy. Then dump it in a pot with broth and simmer until its soft enough for your blender to deal with.

The ABC’s of Camping with Little Kids 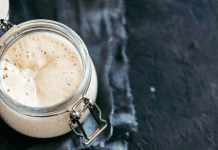 How to make a Sourdough Starter

Heather Gearhart - October 12, 2020 0
Drive around town and you know...fall has come to Flagstaff, Arizona. It's been playing peek-a-boo with us for awhile now, and amateur photographers everywhere (including...

Bringing School Rivalry Home – Why I Might go Crazy

So the Fair is “Modified,” now what?