My three-year-old is an avid bookworm, and as I have been sharing my childhood favorites with her, I have been shocked to discover how many have prevalent sexist themes. 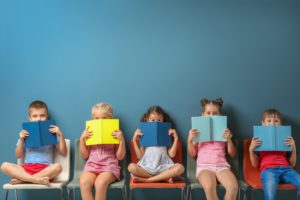 I thought Amelia was hilarious. I would cringe with embarrassed delight as Amelia took the tasks on her to do list literally. When asked to dust the furniture she would cover the sofa in dust. Change the towels? She cuts holes in them. It’s silly. But at the end of every story her employers return home and the wife is aghast to see the state of her home, while the husband is bumbling and carefree and always quick to diffuse his wife’s anger by putting something in her mouth before she can say anything about it. Literally shutting her up. The women’s feelings are consistently delegitimized when she tries some delicious dessert.

The bear family lives a charming life in a treehouse and the stories always have simple, straightforward lessons. Brother and sister bear learn about including each other, or being grateful or eating healthy. Unfortunately the stereotypical dynamic between mama and papa bear is blatant sexism. Mama is always pictured hard at work on domestic tasks while papa is often lounging in his hammock or watching TV. When there is a lesson to be learned mama is often the one trying to teach the lesson to both her children AND her husband. This (all too common) archetype does a disservice to men and women, men are not useless fools who need to learn the same lessons as their children, and women are not responsible for parenting their husbands.

“I’m a pout pout fish with a pout pout face and I spread the dreary wearies all over the place.” It’s catchy, it cute, it colorful, but it is problematic on a number of levels. First of all Mr. Pout Pout is probably suffering from depression and should be getting some professional help. Instead all of his friends tell him simply to cheer up, which does nothing to help him. Until the most beautiful fish in the sea shows up, kisses him without his consent, and solves all of his problems. I understand that children need to be taught that their emotions are not necessarily out of their control (drinking your morning juice in the wrong color cup doesn’t have to ruin your entire day, this is a valuable lesson) but the Pout Pout fish is portrayed as an adult with a long term problem, and then his depression is magically cured by a non-consentual kiss from a lovely lady fish. This is actually popular sexist trope in the media. Men with problems are often portrayed as just needing to obtain the right woman in order to solve their problems, and women are responsible for bearing the emotional labor of fixing these sad boys.

So what should we read instead?

There are TONS of children’s picture books out there that do not suffer from negative gender stereotypes. Here’s a few of my favorite examples:

Ada Twist, Scientist  by Andrea Beaty features characters of color, two affectionate and intelligent parents as they struggle to support their hilariously inquisitive daughter on her scientific explorations.

Elephant and Piggie, By Mo Willems. While the lessons to be learned from Elephant Gerald and his BFF Piggie are not as straight forward and obvious as those learned by the Baranstein Bears, Gerald and Piggie learn patience, kindness, and inclusivity through their heartwarming adventures together.