Being hospitalized after my cesarean section was one of the greatest learning moments in breastfeeding that I never chose to have. I know, it sounds like every mother’s dream, right? But seriously, let me explain.

An “advanced maternal age”, high-risk, IVF twin mom. My magical pregnancy was filled with needles, hormones (and then more hormones), two (yes, TWO) gestational diabetes tests, and a lot of moments hanging my head over a toilet bowl. Or a window. Or sometimes a parking garage wall. I may have even peed my pants once (in said parking garage while hanging my head over a wall).

Breastfeeding turned out to be one of the first major decisions. Within 2 hours of my C-section, both babies were in the NICU receiving outstanding support and love from my husband and the amazing team of nurses. As for me, I was wheeled through their nursery for a hot second to say hello and then taken to a highly monitored room where my own set of nurses worked tirelessly to get my blood pressure down. At some point between the monitoring and medications, a lovely lactation consultant stopped by to show me how to use a breast pump.

It was in that blurry, exhausted, slightly scary (did I mention that I HATE hospitals?) moment that I knew I had a decision to make.

Was I going to attempt to breastfeed two premature babies when I wasn’t even allowed to walk on my own yet? Would pumping be a good alternative? Would we be able to nurse after my little ones had been using a bottle? Should I give myself a break and just go straight to formula? 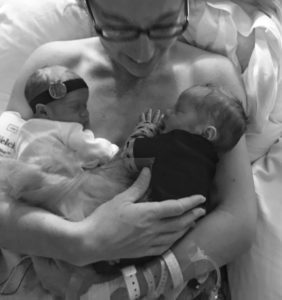 My twins were being fed through tubes at this point and comforted using a pacifier. Yes, there was a chance that we would have to use bottles if they couldn’t – or wouldn’t – latch. But, I could barely sit up in my bed. My limited visits to the NICU consisted of me being wheeled down the hall, assisted into an oversized chair, and trying to keep myself together for an exhausting 30 minutes of holding my babies. I knew the only thing holding me together was the thought of being able to hold my little ones on my own overstuffed chair once we were released from the hospital.

Perhaps my decision was born out of desperation to regain a sliver of control in an uncertain situation. Maybe there was some pride in being able to contribute something more than a warm set of arms for my babies to curl up into. That night, I started pumping religiously to give the twins as much colostrum as possible. While formula was their main source of calories, I pumped with the fervor of all mothers out there whose only goal in those first few weeks is making sure their little ones are satiated and growing.

A week later, we were all healthy and on our way home. I continued to pump like crazy until the twins eventually latched (at first with the help of a nipple shield, and then on their own). We used breastfeeding, pumping, formula, and bottles for several months to fatten up our little dumplings and give everyone a precious few hours of sleep.

Looking back, I am eternally grateful that I was able to nurse my twins for 18 months. My husband and I still laugh when we think about the hours I spent pumping in my hospital bed, only to produce a scant 2mL of colostrum, most of which stuck to the feeding tube when the nurses administered it.

I know that if I hadn’t put my own concerns about formula, latching, nipple confusion, and everything else I’d endlessly researched online aside, there’s a chance I may not have been able to produce enough milk, let alone nurse both babies, for as long as I did. Being hospitalized taught me an important lesson about the art of letting go. It’s in those moments that we can truly take a deep breath and simply allow ourselves to be the best parents possible. 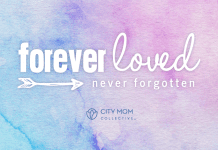 An Open Letter to Me Going Through a Miscarriage