From the moment society discovers we’re pregnant, they want to know…they NEED to know: is it a boy or a girl?

I find this question so mind-boggling because no matter the answer the stranger is given, their response is the same! Usually, a friendly smile and some complement or horror story about having a child of that sex.

We chose not to find out what our baby’s genitals looked like until birth, so we were free from having to tell anybody what sex our pre-born child was. And while I could go into the pros and cons of keeping that part of parenthood a surprise, it’s more important to discuss gendering after the baby has been born. Since they’ll be earthside much longer than wombside.

In general, society has gendered everything from clothes to names to favorite colors, animals, and desired careers, even household supplies. While I think it’s fine for you to have a pink tool set, I don’t think it’s ok to tell my daughter in no uncertain terms what is and is not acceptable for a woman or young girl. And the research says that these patriarchal gender norms are harmful to boys and men as well as girls and women, and that doesn’t even begin to address the issues our friends in the LGBTQ+ community face daily. So here’s my brief surface guide to remaining gender neutral after birth and your child’s apparent sex has been laid bare.

Shop in Both Clothing Sections

I love frilly froofy dresses as much as anyone, and while I thoroughly enjoyed my childhood of ruining dresses and tights in mud and in trees, my daughter doesn’t seem as into the flounciness as I was. She refuses to wear bows or headbands or hairclips. She expresses her frustration when her skirt inhibits her movement. She adores the stars of Captain America clothing and squeals with excitement when she notices she’s wearing cars.

Sadly, most girls’ clothing departments have extremely gendered clothes in color, style, and content. Target has been slowly adapting to their millennial audience by including clothes for girls proclaiming their potential as president or in STEM careers. The boy’s department is even worse. Patriarchal nonsense like “daddy’s little sport” or “heartbreaker.” Again, Target has been shaping up the game slowly with tees for boys like “strong like mom” coming out around Mother’s Day last year. I just discovered a kids’ clothing shop online that sells basic tees geared towards boys with sayings like “feminist like daddy” or “love is my superpower.”

Boys like dolls and babies. They like taking care of babies and changing their stuffed animals’ diapers. Girls like tools and trucks and legos. Kids like toys, and if the toy is specific for a certain set of genitalia, it isn’t for kids.

Something extra crunchy and developmentally appropriate: dolls with accurate representations of genitalia. 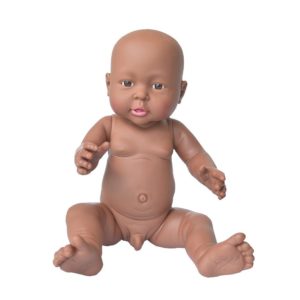 We’re big fans of Daniel Tiger over here, with simple moral and societal lessons like washing hands and how to deal with emotions. It’s the show that’s evolved from Mr. Roger’s Neighborhood. We love the intersectionality of having all kinds of people, all kinds of romantic relationships, shapes and sizes, and colors, and positive behavioral help.

Confession: when I find my daughter’s behavior or tone challenging, I often think to myself, “What would Mr. and Mrs. Tiger say?”

Also, I was getting super irritated with Thomas the Train because the only females in the show were the carts that went behind the all-male train engines (really???), but my little girl has expressed interest in trains and often asks to watch “twain.” So my awesome feminist husband looked up feminist tv shows for kids and found Chuggington to be much more in line with our values. They sport male and female train characters, all sorts of ages and backgrounds and accents with real-life issues.

We have added some intersectional feminist books to Mo’s collection, some are great for toddlers and some are the next step up.

–She Persisted by Chelsea Clinton

–She Persisted around the world: 13 women who changed history by Chelsea Clinton

–Little Feminist Board Book Collection by Galison, Kleinman, and Ortiz

–This Little Trailblazer a girl power primer by Holub and Roode

Sometimes, boys get sad; don’t tell them to “man up.” Don’t call girls bossy for an action or dialog for which a boy could be called “assertive” or “a good leader.” Girls like to get muddy and dirty and climb trees and play sports. Boys like to dance and do art and pay attention to fashion and grow out their hair.

Get Radical: Use They/Them Pronouns 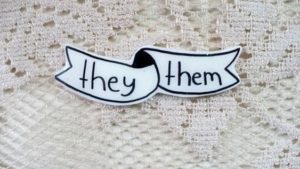 I’ve been paying close attention to my assumptions and language about people as I’m narrating everyday life for my child. I find myself assuming a person’s gender based solely on how they look. I really want my daughter to learn they/them is appropriate and respectful terminology for someone she doesn’t know or until that person specifies their preferred pronouns. Some people get weird about the grammar of they/them for a singular person; here’s an easy how to. Also, if someone assumes my daughter is a boy (usually because she’s daring to wear blue and no bow in her hair), I go with it. I don’t correct them (see how I used that pronoun to refer to a person whose sex and gender I don’t know??) and often will refer to Mo simply as Mo. You can try to replace he/him or she/her with your child’s name instead if they/them is still too weird for you.

In General, Just Challenge Your Own Assumptions

When you talk about strangers or sign your kids up for extra curriculars, ask yourself whether you’d say or do the same thing if they were the opposite sex.