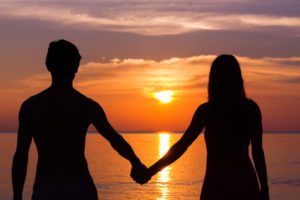 I’ve soaked up the Hollywood version of relationships throughout my entire life. Thus, my idea of romance and courtship comes from a combination of 80’s and 90’s rom-coms, General Hospital, and Beverly Hills 90210. I know, it’s surprising that I’ve never slept with a teacher or hard-core stalked anyone. I watched The Notebook until I was convinced that I would not settle for anything less than an Allie-and-Noah relationship.  I mean, how else would a man prove his love to me other than by building me a house and waiting patiently in the wings while I almost marry another man? And then he grabs my face in the rain and declares, “It’s wasn’t over! It still isn’t over!”

Ooohhh. So. Many. Chills.

Cue to my actual, real-life relationship: My husband and I are locked in a battle of: “Who can stuff the most trash in the garbage can without taking it out?” I’m sighing and eye rolling him as he naps on the couch and I pass him with the 36th load of laundry to fold upstairs. We’re making fun of each other as we ice our necks and soak our feet after our workouts. He’s not at all embarrassed anymore to let the bodily noises fly in front of me.

This is not exactly the picture that Hollywood paints of Happily Ever After.

Here are 3 truths I’ve come to realize about real-life relationships in our almost 10 years of marriage:

I mean, my husband is a Scorpio. Enough said to my astrology-savvy friends, amiright?!  Seriously though, I hate arguing…but I’ve realized that it’s inevitable. Believe me, I’m not a “bury-it-under-the-rug“ type of person. I’m more of a “I’m right and here’s why“ type of person. Therefore, I can be as passive-aggressive as anyone. Furthermore, I hate it when he inevitably proves me wrong or disagrees with something I’ve done. Then again, without ever arguing, are you really fully communicating? If you bury it and pretend like everything’s fine, it will come out eventually. Trust me. It’s so much healthier to get your differing viewpoints out in the open, as long as it’s done as respectfully as possible. And not in front of the kids.

2. Your Quirks Will Become Annoying

I remember a time when the little noises my husband makes as he’s puttering around didn’t make my teeth clench. As well as I’m sure he remembers when my neuroses were kinda cute, rather than pathological. Either way, living with someone for 13 years now seems to result in lowered tolerances for minor annoyances. For example, I used to delight in the way he provided sarcastic commentary during my Bravo shows. These days, I insist that he sits in absolute silence with me as I hiss, “Listen!” when Lisa Vanderpump is speaking.

I’m joking, of course. Then again, it always blows my mind when I hear that someone has a baby in an attempt to salvage their relationship or marriage. Are you kidding me? Nothing puts stress into a relationship like a screaming infant or impetuous toddler. Furthermore, parenting as partners comes with many differences of opinions, stances, hurt feelings, and incredulous declarations: “You let him do what?!” or “Back me up here, please!” Even when your foundation is solid, kids can crack that as quickly as you can say, “It’s your turn to change her diaper.” Navigating your relationship with parenthood is usually not as sweet as… I can’t actually think of any romantic comedy about parents parenting. Hmm.

Although my husband is not chasing me through an airport or serenading me with a boombox to declare his undying love, I still think we’re pretty lucky. We may make a boring movie, but I believe we have a lasting bond that’s made up of the important stuff. Real life marriage is not a Hollywood romantic comedy, after all.  And in the end, there’s no one else I’d rather navigate life, marriage, and parenthood with.

Raising An Introvert: An Extrovert Struggle 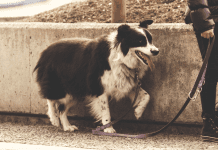