My breastfeeding journey started out ahead of the curve.  My husband and I met with an International Board Certified Lactation Consultant (IBCLC) one-on-one weeks before giving birth.  We took a prenatal breastfeeding class, practiced feeding holds, learned about latches, and registered for breastfeeding supplies.  I even took a class about pumping for going back to work before we selected my pump, never imagining that my pump would become another appendage for me just days after my baby girl was born.

My daughter’s birth was relatively uneventful.  We achieved our goal of an unmedicated, doula-assisted birth at Flagstaff Birth and Women’s Center, but due to the complicated stitches I needed, my daughter spent most of the “golden hour” for breastfeeding bonding with her dad.  Our doula and midwife had tried to help her latch unsuccessfully before starting my stitches, so instead of breastfeeding, she snuggled up and fell asleep on her dad’s chest. 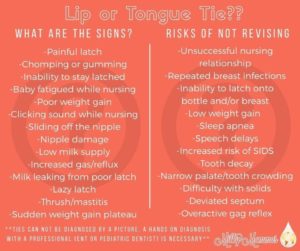 The next few days were a whirlwind.  Our lactation consultant and midwife visited us at home.  Our baby had lost several ounces, but nothing outside the normal range until day three when she began to look jaundiced.  After working with a pediatrician, we found out that she was dehydrated, rather than jaundiced and that she had already lost 10% of her birth weight, a number that pediatricians don’t like to see.

We began supplementing immediately, using a feeding method called triple feeding, where baby would nurse, I would pump, and then baby would take a bottle in order to get her enough ounces to be full, a technique that we continued until “Baby E” was 6 months old.  I started out as a “just enougher,” a mom who provides just enough ounces for her baby’s needs, or so I thought.  Baby E was just not getting milk from me.  Her low demand eventually created supply issues on my end… my milk took over a week to come in and eventually wasn’t enough to feed my baby.** Many moms think this is the case if their milk takes a while to come in… please don’t use my words to diagnose yourself, especially if you are early on in your breastfeeding journey, seek professional help. 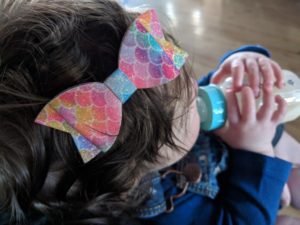 At three weeks old, after extreme nipple pain (and damage) for me and lip blisters, continued slow weight gain for baby, I pushed to have Baby E evaluated for a tongue tie. We had clipped here in Flagstaff and eventually lasered by a preferred provider in Phoenix at five months old.  Around the same time, we began working with even more specialists to treat baby’s torticollis. (Neck tension that creates an extreme “preference” in the direction that baby likes to look and, in our case, can lead to flat spots on the head and refusal to nurse off of one side). We saw (and still see) a chiropractor, a physical therapist, and a craniosacral therapist, as recommended by our pediatrician and the pediatrician who treated our daughter in Phoenix.

My daughter had continued to drop weight percentiles until five months old, which is why we finally got referred to Phoenix to have her ties evaluated.  Looking back, I wish we would have gone to Phoenix earlier as she would have been less opinionated about her eating preferences.  When we were one month post-operation, she was gaining weight and starting to catch up on her movement milestones.  With the help of the specialists we had seen, even her head was rounding back out.  Her pediatrician here, however, had asked us to do the impossible: make sure baby was getting thirty ounces of milk a day every day when she was previously getting between twenty and twenty-four ounces.

I had tried everything to increase my supply–EVERY supplement, tea, and cookie.  I even took a hormonal blood panel that came back negative for abnormalities.  The only thing that we found that truly increased my supply was friends… and even strangers.

My husband and I were (are) committed to keeping our baby on breast milk, so we decided to make up the ounces with donor milk.  Our friends at the Birth and Women’s Center had helped us get initial milk from the Mother’s Milk Bank in Colorado.  Eventually, we found entire Facebook pages designed to help connect moms with breast milk oversupply and moms with breast milk under-supply.  We use Eats on Feets and Human Milk 4 Human Babies to make up the extra five to ten ounces Baby E needs each day.  I did the math and at least seventeen moms from three different states have helped nourish our little girl, who is now eight months old. 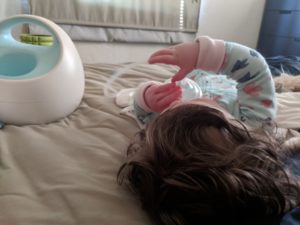 Our breast(milk)feeding journey continues to be challenging as my baby refused to latch after turning six months old.  She had refused me off and on before, but never for an entire day or several in a row. Baby E’s prognosis from her tongue tie recovery was great, so it broke my heart to feel that strong refusal from her again.  “We were supposed to be best friends until she turned three,” I told a friend.  The hardest part of parenting sometimes is recognizing that our children are their own people despite our best wishes for them.  I’m not ready to give up on our commitment to nourish Baby E with breast milk, so I have committed to exclusively pumping for her, which although it isn’t nursing, it IS breastfeeding.

Another thing I learned at a recent visit to one of the nursing support groups in town is that I am (we are) not alone.  In a group of about twelve moms talking about their nursing hurdles, only two had what I would describe as an idyllic nursing relationship– one of whom had had a tumultuous relationship with her first baby, but not with her second.  Women I had sat alongside for my whole maternity leave as I thought, “Wow, she has it so easy,” had shared their struggles and most had a laundry list like mine.

What keeps me going?  First, my extremely supportive husband who has washed SO MANY bottles and pump parts and who often helps bottle feed our baby while I pump. And second, The community of moms I have found locally through Flagstaff Breastfeeding Support, La Leche League of Flagstaff, and Nursing Nook at Flagstaff Birth, Breastfeeding, and Women’s Center and other exclusively pumping moms I have found on Facebook in this group and this group. 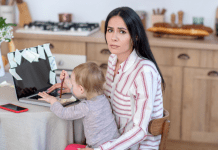 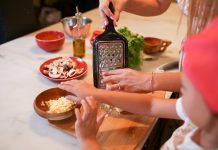