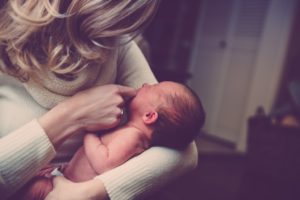 I was in line at a local, upscale grocery store buying prenatal vitamins when the cashier complimented my neon pink nails. She said not everyone could pull them off. I explained that I had them done as a way to celebrate that I’m expecting a daughter.  Is this lame and gender-stereotypical? I guess, but I wanted nails like Elle Woods in Legally Blonde. The cashier congratulated me and then I mentioned that I already have a boy.

I just said, “apparently I’m not,” and left her scrambling to reply.

I’ll be 28 in May. We all know (right?) that you can get pregnant as soon as your period starts around twelve years old, so even if the cashier thought I looked young for my age, there is no way that I could literally be too young to have already borne a child. My dad’s mom had him at fifteen. I could have 5-10 kids by now.

I thought she meant that I looked too young to be a socially acceptable mom of two, shopping there with the other crunchy moms. Or maybe I just looked much younger than the other moms she sees all the time in the store.

This is a touchy subject for me, which makes it hard for me to take these comments as a compliment and move on. I grew up with a “young mom,” and people assumed she was less competent. They didn’t want her to be part of the Girl Scout troop. They didn’t want her on the PTA. Strangers thought we were sisters, and when they found out the truth they never held their comments back. Men decided my mom was single, or easy, and they would try to get to her through me. If my grandmother was present at a school function, the teachers would direct all their comments to her and ignore my mom completely. It was clear to me that the price of being a young mom was a constant struggle for credibility.

One of my friends in first grade told me that her mom said my parents were still babies, and they should be swinging on the swing set.  I felt embarrassed, but I still wanted to be invited to her birthday party. Another “friend” in elementary school told me point blank that I was an accident. This is why the “young mom” stigma matters. Our children are left grappling with the fallout. I wondered what it meant to be an accident, and if it meant my parents were bad, or if it meant that I was bad. I resolved at an early age not to have children until I was into my twenties and it was safe. Oh, the irony.

The average age of first-time moms varies region-by-region and is steadily climbing, but that does not mean that having children earlier is an invalid choice, or that “younger” moms are less suited to the task. You do not need to have three college degrees to be a good mom, or to have gone to Europe, or to have good health insurance (even though those were boxes I dutifully checked off). Moms know the truth: nothing prepares you for actual motherhood. I read many, many scholarly articles about sleep training. My kid still sleeps in my armpit. We are all experiencing on the job training. I think we all know this on one level, but we are so trained to react to differences that we don’t think about the consequences of our assumptions.

The last time I visited my mother in NC we went to the mall. I popped into a store while she took my toddler to the carousel. While in line a man started chatting with her. She told him how excited she was to see her grandson, and he said, “There is no way this is your grandson. Boy, you got started early.” Even as a grandmother the comments continue. Maybe he didn’t mean anything by it. Maybe the cashier at my grocery store didn’t either, but the sum of these comments over a childhood or a lifetime matter. When you hear “There’s no way,” or “That’s not possible,” enough times, it invalidates your experiences. It makes you question your authority as a mother.

When I was pregnant with my son a lady asked me what my plan for the baby was. With my pregnancy brain, I had no idea what she meant, so I just said that I planned to feed him and hang out and stuff. On another occasion, a friend of a friend overheard me talking about my job and asked me how old I was. When I told her she said, “Oh, I’m relieved. I thought you were 16 and pregnant.” I thought, so what? Was she worried in a supportive way, or was she judging me? I feel like my childhood and early motherhood have been clouded by the specter of shame, some of it tangible and some of it perceived.

The internet is full of people dismissing anyone who is seen as “too easily offended.” What do I want from you? Just be nice to young moms, whether you know their age or you just see them as young. Go out of your way to include them. They might not feel as confident in making friendships, or volunteering to join groups, or even offering their opinions. Let them know that their voice matters. Watch what assumptions you verbalize around your own children, and never, ever say anything rude to their children.