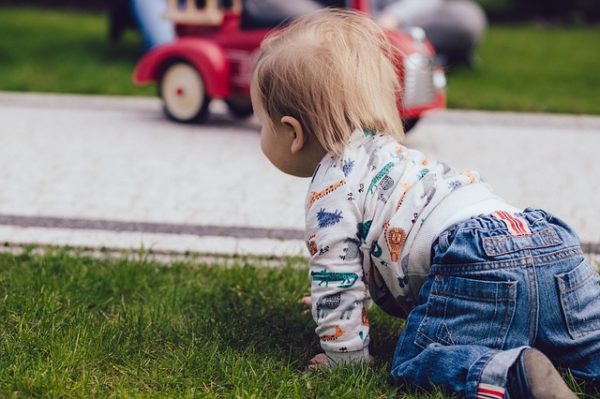 Today I was out at Art in the Park with my son. As we were strolling around a lady took to him. She asked how old he was, and I said almost fifteen months.

“Oh, he must be walking then,” she said.

No. Nope. He’s not. I told her as much. He can climb onto and off the couch. He can pull up, and bounce. He pushes his push toy around the room. He’s even stood alone a few times. But he hasn’t taken any steps unassisted.

For the most part, everyone has been supportive. Kids do things at their own pace. As long as a child is progressing, and not losing any skills, walking anytime before 18 months is considered normal. Our daycare “crawling” room goes up to 18 months.

Of course, this total stranger decided she should weigh in about how it’s my fault. I told her he points in the direction he wants me to carry him, and before I could get to the part where I explained how I encourage him to walk there himself, she cut me off.

“I bet you take him wherever he wants don’t you,” she said. “I’m an occupational therapist, I know these things.”

I’ve done everything I can think of. He’s a skillful crawler and climber so he figures out how to quickly get items he wants without walking. I hold his hands and walk with him. I clap whenever he does anything close to taking steps.

He’s a happy baby. He zooms around the house leaving toys in his wake. I’ve decided to go with his flow and not stress him out. He’ll be ready one day.

It’s hard to watch babies months younger than him toddle around the park as he drags his knees through the sand, and pushes his booty up in the air to crawl-walk. He’s a solid kid, who is tall for his age, so he looks even older. I can’t help but wonder if everyone is judging me the way that lady did today.

If you see a Mamma with a toddler who’s not so much toddling, just react out of kindness. It’s easy to make mountains out of milestones, but we are all on the same path. The best thing you can offer a stranger is encouragement.

How old was your child when they started to walk? Did you get the same reaction if your child was a “late” walker?